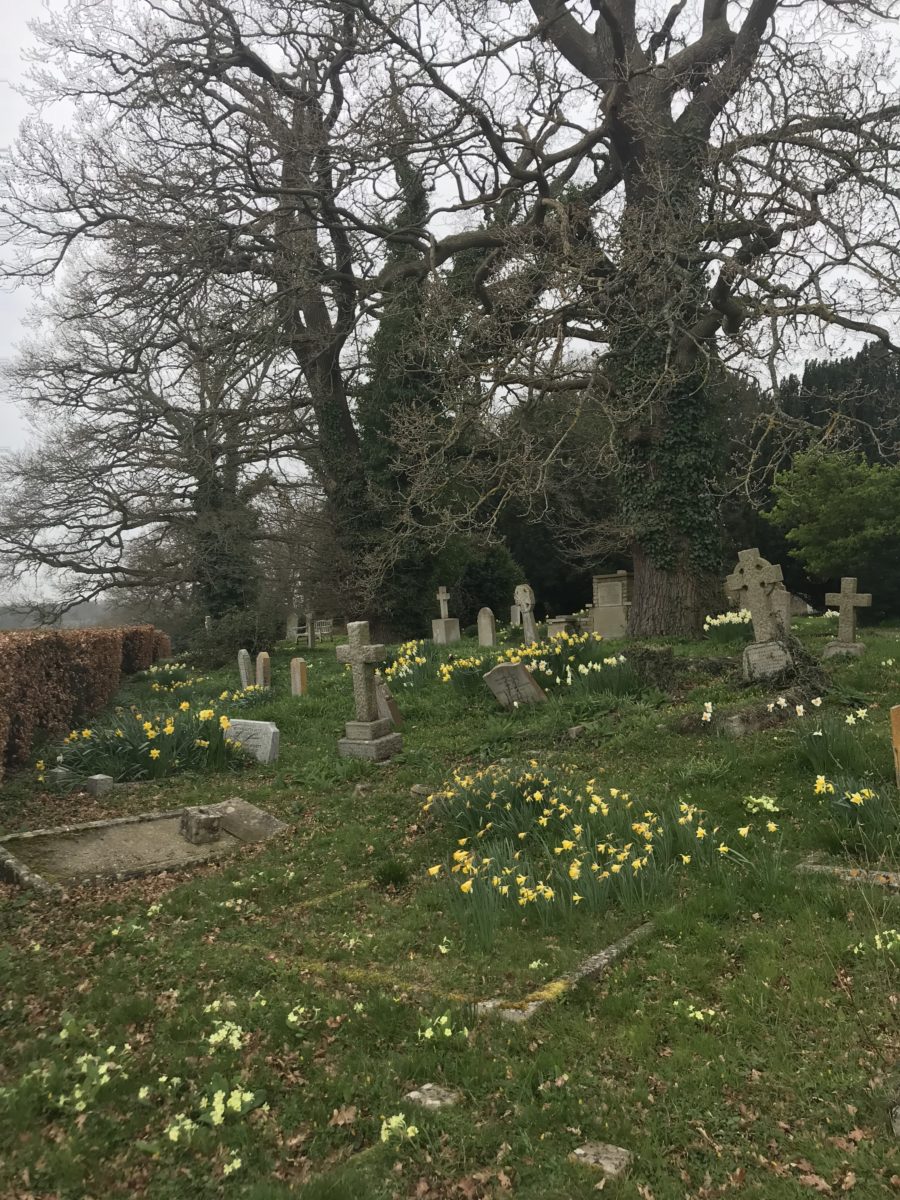 The ‘wilding’ of an area of grassland means reducing the traditional mowing and tidying regimes so as to allow wild plants on the land to grow to full size so that they can flower and set seed. This should encourage more butterflies and other insects, and bring an overall increase to the biodiversity of the site – resulting in a better experience for any human visitors.

The success of a wilding exercise depends on the age and richness of the original soil and turf – the older the better and the richer and the more diverse the range of flora that might then flourish.

The wilding of a churchyard is controversial. For some people a host of wild flowers adds to the peacefulness of the scene. For others, such untidiness is a desecration to the memory of those interned there.

‘Old’ St Mary’s has been there since the 13th century, and there was possibly a church there previously. The churchyard soil and the seed-base within it may possibly be centuries old, so the potential for a good latent wild flora is high. What everyone agrees is that this churchyard is in a marvellous position, already having both tranquillity and fine views. Can ‘wilding’ make a visit there even more satisfying?

If ‘wilding’ is worth doing, we need to first know what is already currently growing in the churchyard. Identification requires allowing the plants to grow large enough to flower; mostly this happens between May and August. Comprehensive mowing, cutting and strimming over the next few months would prevent us knowing what sort of asset base we have in this churchyard, so some initial wildness might now be needed while we find out what’s there.

It is intended to carry out an experiment through 2022. Ten varied separate parts of the churchyard have been identified and they will remain uncut through Spring and possibly into summer. Normal cutting will resume in the autumn. A botanical survey will be carried out, weather permitting, on 26th May, assisted by HIWWT (Hampshire & Isle of Wight Wildlife Trust). This will give us a first impression of the richness of St Mary’s botanical heritage, and so will inform the management of the churchyard for the rest of the year and into 2023.

So, if you see parts of the church’s environs looking a bit unkempt over the next few months, it is deliberate. The Parish Council are working alongside John Collman and Colin Horwood, who carefully tends the grounds, to find out the potential richness of our local biodiversity and be in position to plan for the future. It’s intended to fully inform parishioners what is discovered. It’s not a case of looking just at the flowers; anyone who is an expert in identifying beetles, moths and other insects and who would like to get involved should get in touch with John Collman on jrc.hartley@btinternet.com