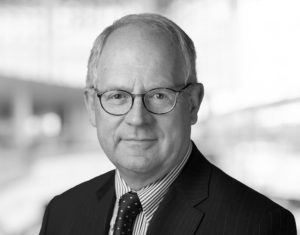 Nick Cooper has lived in Hartley Wintney for 35 years, now occupying his third house in the village having originally moved from Reading.

He is a chartered surveyor by profession and has always worked in the real estate industry, both domestically and overseas, primarily as an investment manager assisting pension funds and alike with their investment decisions. He has worked across many areas of the market from general and affordable housing to retail and offices.

Having spent time living in the US for work, he returned to the UK in 2013 and helped form Friends of Hartley Wintney, a support group to various local organisations which has now become part of the Rotary Club of Hart. He has, some years ago, been a playing member of the Cricket Club and continues to play golf, erratically, at HWGC! He is a former Chairman of Hartley Wintney Scout Group.

Having lived in the village for many years he has seen it develop and evolve. He believes that growth is a sign of a healthy environment, but also recognises that this needs to be balanced against retaining the village’s unique identity which is what makes Hartley Wintney such a great village and place to live.

In his spare time, he is a passionate follower of Harlequins RFC, Hampshire and England cricket, as well as spending time trying to improve his golf handicap and enjoying time with the grandchildren.

Declaration of Acceptance of Office