Important Note: Visitors are respectfully requested to keep their dogs under close control during the spring and summer months to avoid disturbing the protected ground nesting birds.

To the north of the village is Hazeley Heath – Bracknell Lane, Hartley Wintney, nearest postcode RG27 8TS. Grid reference SU 76018 57568. It’s a 175ha area of partially wooded heathland, two thirds in Mattingley parish and one third in Hartley Wintney – where it is owned by Hart DC.

Parking is available in the lay-by on the B3011 or you can walk from the central car park in Hartley Wintney. Buses stop on the B3011 by the water tower. There is a network of paths, some on firm gravel and some across wet heathland which have boardwalks in places.

This is one of the largest tracts of lowland heathland in the region where 90% has been lost in the past 100 years. This endangered environment supports an array of plant and animal communities and it is because of this rich biodiversity that it has been notified a Site of Special Scientific Interest (SSSI), by Natural England. It is also part of the Thames Basin Heaths Special Protection Area (SPA) for its heathland birds. 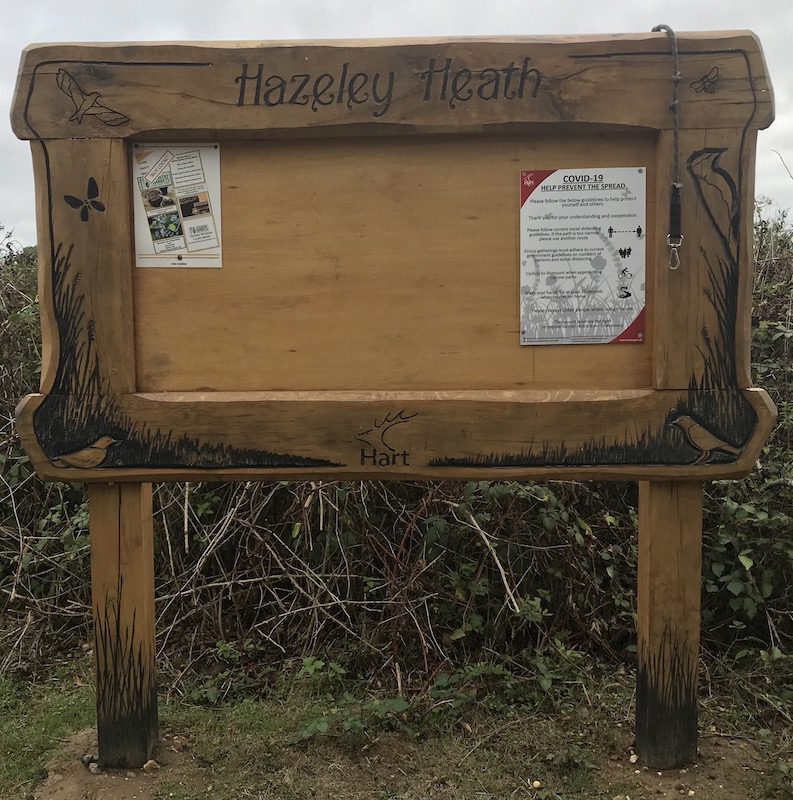 Our section of Heath has seen many changes. It is common land with usage ranging from a racecourse in the early 1800s, through gravel-digging in the late 1800s, municipal rubbish dump in the 1920s-60s, army training in World War II, to a leisure space today.

Heathland is special; the UK (and Hampshire in particular) holds much of the world’s lowland heath. Since 1979 Hazeley Heath has had statutory protection for its specialist vegetation as a SSSI (Site of Special Scientific Interest). In 2005 it also became part of the Thames Basin Heaths SPA (Special Protection Area) as a place receiving EU protection for its specialist birds – Nightjar, Woodlark and Dartford Warbler.

“The Heath” is worth visiting at any time of year.
* Winter is for atmosphere rather than wildlife interest (except for deer).
* Spring and early summer brings the return of the breeding birds and some superb specialist flowers; one can look for Petty Whin, Sundew, Bog Asphodel and Heath Spotted Orchid as well as see Dartford warbler, nightjars and woodlarks. There are adders too!
* High summer through to autumn when  the butterflies are most obvious – look for Graylings and Silver-studded Blues – and of course the areas of heather can be magnificent.

The traditional usage of Hazeley Heath by commoners of course no longer happens. The specialist vegetation naturally turns into scrub and woodland unless the old regimes are somehow copied. There is a published Management Plan and the land is cleared and kept open through the use of largely volunteer working parties by mechanical cutting, mowing and scraping and by the introduction of managed grazing of local rare breed cattle.

If you have any questions regarding the southern heathland within Hartley Wintney Parish the Countryside team can be reached at;